I recently went back to Anchorage for the first time in six years. I flew Delta from Seattle, and I kept thinking how weird it was, because the Delta I remembered from Anchorage hadn’t flown to Anchorage from Seattle in daylight hours since the early 1990s. It must have felt even more strange for the Flight Attendants, for I overheard from their conversations that they were all ex-Western Airlines, which means they’ve all been flying for at least 30 years.

I wondered for a moment why we had such a senior crew, then I realized that they were probably based in Salt Lake City, where the flight originated, and some quick mental math of Delta’s flight schedule and work rules told me that they’d have a nearly 24 hour layover once in Anchorage. Ah, that’s why.

But I digress. The flight north was glorious. I watched a movie and took periodic glances out the window. That’s one of the interesting things about natural scenery – aside from the aircraft itself, the view is virtually the same as it would have been in 1962 or 1982 or 1992. My very first flight was from Seattle to Anchorage when I was ten days old, and the view would have been much the same then, as well.

Having not flown in Alaska for some time, I also seem to have forgotten how world-class the turbulence can be. With my flying mainly limited to the Lower 48 for the past several years, it’s been a while since I’ve been through some of the stomach-flipping chop that we’re used to in the North.

We finally broke through the clouds and I saw Mt. Susitna (a.k.a. Sleeping Lady to those who know the legend) and my promise to myself not to cry a little bit flew right out the window.

Anchorage hadn’t much changed. There were a couple shocks. The house I lived in during high school has been painted fire engine red, I imagine much to the chagrin of the surrounding neighbors. I pictured most of the neighbors as having moved, just like we did.

Which brings me to another odd point: Brain drain. I’d say about half of the friends I went to high school with have chosen to make their lives elsewhere. They left for college and have either not returned or returned for brief periods, only to move away again. This is probably a good topic for discussion – feel free to leave a comment. I, myself, left because my chosen field is very narrow, with a handful of people in a handful of cities doing what it is that I do. In fact, the number of people who live in Anchorage who do the job I do can probably fit into a subcompact.

The friends who have remained tend to have strong family roots or a great love of outdoor activities. I’ve envied that, actually – sometimes I wish that my chosen field had been one that was universally applicable, like teaching or dentistry, allowing me to live in virtually any city that struck my fancy – alas, my talents lie elsewhere.

It’s like a time capsule. Subsequent owners have painted the garage door (it used to be light blue) and that’s it. All of the light fixtures, exterior fittings, even the mailbox remain exactly the same as they were the last time I set foot in the place during the summer of 1992. I wonder if the new owners also grow sword ferns by the walkway during the summer months.

The only thing that betrayed the passage of time in the neighborhood were some of the trees that I remember being my height as a child, are now, some two decades later, massive (more so than me). Still others seem to have been felled in some places – I feel like there were more trees in the neighborhood when I was a child but again, I feel like everybody  we shared space with in those years has moved away and their houses have been taken over by strangers. Maybe the strangers aren’t as fond of trees.

I also drove up to Big Lake to see what had changed there, for it had been even longer, nearly ten years, since I had been there. I’ve heard the people who bought our cabin there hadn’t done much with the place, and had never visited again outside of the year we sold it to them. Some friends (who had also sold their home on the lake) told me they had gone back a year or two ago and mentioned some of the changes, so I was somewhat prepared.

I absolutely did not expect Neighborhood Video to still be at the Eastlake Mall, although I also wasn’t expecting Alaska to be the last vestige of the Blockbuster Video chain (apparently it’s due to high broadband internet prices). Neighborhood Video is still there, and although I didn’t go in I still imagine to myself that it still operates tanning beds as a side business, and that the cheery permed Geena Davis lookalike named Sandy still runs the place. I had a good cry over that too – really, I’m a terrible blubber.

I drove on, spotted a moose, NBD, and noted how the road now branches in a place I hadn’t expected. The main road my cabin is now an offshoot of a new main road. I was also acutely aware of all the “No Trespassing” signs on the road leading into “my” cabin, and I came to the realization that, no longer an owner, I was, in fact, trespassing. It made me uncomfortable. I told myself I shouldn’t have come on a Saturday. What if, by some fluke, the new owner was there?

When I arrived, I found the driveway had not been plowed out (you have to pay someone to do it with their truck) although the rest of the road had been. Nope – still the same situation – these people had not been around for years. I told myself I would walk up to the place and I would stop and reflect, but when I got out of the car I found myself even more uncomfortable than I had been when I encountered the No Trespassing signs.

The little plastic raccoons still inhabited the garden. My old yellow sailboat laid forlornly underneath a pile of branches and other rubbish. The lovely hillside that was supposed to have been part of an easement that wouldn’t be developed had been carved away into a road for the adjacent neighbor’s land. Where we once had forested seclusion on all sides was now naked and barren. Trees and landscape had disappeared, but the cabin itself lay unchanged in the midst of it all. Here, too, the evergreen trees had grown up, and they now obscured much of the view of the lake from the house. “Our” things were strewn everywhere. Gas cans, tools, our flag pole, bird feeder, canoe, fire pit, signs – everything that we had left was still there in a state almost like it was waiting for our return. The stairs we built, the dock we built, the trees we cut down and the trees we planted, the wooden walkway and the deck extension and the terraced flower beds. They were all there, in frozen enshrinement to the memory of the energy we’d spent building and living in these spaces.

The spirits were strong here, I thought – I feel like Jacob Marley with the Ghost of Christmas Past. It was too uncomfortable. I couldn’t even bear to look inside the house – I had to leave. Fast.

But not before I snapped a picture.

The shed to the left is new. This next picture is circa 1997, when the old one was still up (it has since been torn down). The snow-covered monster where the shed now stands is stacks upon stacks of firewood. 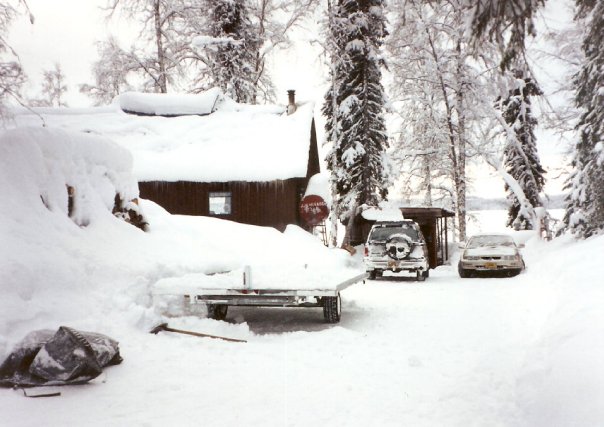 Next, I ventured out onto the Lake, but it took me some time because I had forgotten where the access points were. I first tried the Klondike, but I found that there was no longer a road paved onto the Lake from there. The place had once been a hotel and bar, with plenty of dock and launch space in the summer, and the launch space was a road onto the ice in the winter. The hotel had burnt during the Miller’s Reach Fire of 1996, but had since been rebuilt into condos. No access.

I finally got onto the lake near Burkeshore Marina, and finally started to realize that, for a Saturday, the place was dead. Typically on a weekend the lake is abuzz with activity. Was this the new normal for Big Lake or simply a function of the fact that there was very little snow? In my day, Snowmachiners weren’t put off by that sort of thing, but I also don’t recall a winter with so little snow.

I smiled as I remembered to take off my seat belt as I drove out onto the lake, as I’d always been instructed to as a child. The idea is so you can escape quickly if the vehicle begins to go through the ice. I was sharing the road with a plane on skis and I smiled to myself again as I realized odd it must seem to people who aren’t accustomed to northern living.

The float plane is way off in the distance by now, and can’t be seen in this shot – but look – there’s nobody on the lake at all. And no snow. There would normally be a huge snow berm on one side of the road, but it’s barely a bump.

I also visited our original cabin on Long Island, and I didn’t step “ashore” (again, no road plowed) but the place had similarly not changed. I knew from the times I’d driven by on the boat that the new owners of this cabin were much more frequent visitors, so I feel like our presence here has faded with use. Still the same old bones though – not much change. 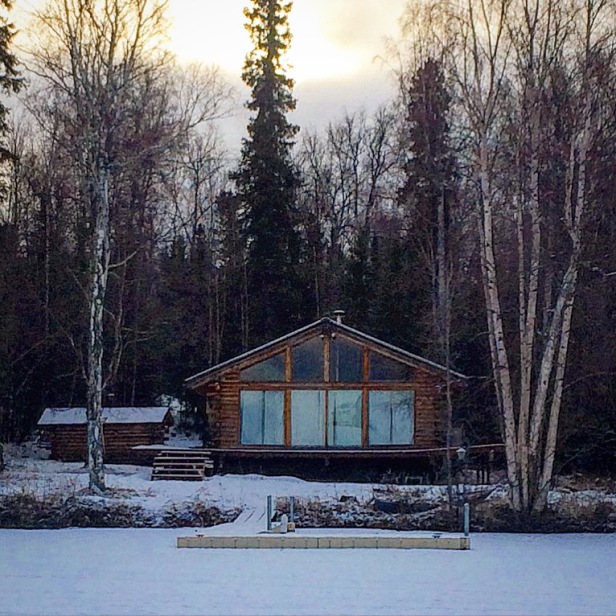 They’ve built a flimsy deck and moved the stairs, but it’s essentially the same place. Here’s a picture back from the days when we actually used to get snow in the winter.

I also seemed to be unable to stop thinking about this photo of us out on the lake in our canoe, because I realized I must have stopped the car on the ice to take a photo of the cabin in about the same place we must have been in the canoe when this picture was taken:

I had a good laugh stopping at the gas station on the way back out of town because the Diet Pepsi sign above the coolers was unmistakably from 1990. Plus ça change, they say.

As I drove back to Anchorage, I began to wonder if I wasn’t haunted by these places because the memories had come back so strong when I visited. Whether warm, or a bit misty, or rather uncomfortable, they seem to stir some kind of emotional response. But then going a bit deeper, I began to realize that the thing that threaded them all together was me. My energy seemed indelibly marked upon these places, and I began to wonder:

Am I haunted by Anchorage and Big Lake, Alaska, or do I haunt them?