The Mexican state of Sinaloa isn’t at the top of most tourism lists. It’s a mainly agricultural state known as “Mexico’s Breadbasket” that straddles the Tropic of Cancer and is mostly rural, and somewhat off the radar scan for Mexico’s mega resorts like Los Cabos and Cancun. However, during a recent visit to Mazatlan by examiner.com, there was much to discover. Unlike the “Vacation Inc.” resort areas that were purpose-built from the ground up by corporations, travel to Mazatlan certainly feels more like “travel” than simply a vacation.

While many visitors to Mexico seem comfortable in self-contained resorts, the beach hotels in even the touristic Zona Dorada or “Golden Zone” are still in the midst of a thriving Mexican city for which tourism is a rather secondary purpose. Visitors to Mazatlan can rub shoulders with the city’s residents as they walk along the waterfront Malecon (which is the longest of its kind in Mexico and the second longest in the world), enjoy contemporary international cuisine at a fine restaurant such as Chef Diego Becerra’s El Presidio in the Historic District, or relax in the colonial Plazuela Machado.

There’s plenty to discover in Mazatlan (and it’s quickly being discovered by more and more international tourists, as evidenced by the number of construction cranes building new hotels and condominiums), so be sure to head down Mazatlan way before the crowds unlock the secrets of this “Colonial City on the Beach”.

Accommodations and meals were furnished by the Mazatlan Hotel Association in preparation for this article.

The beaches in Mazatlan are made up of fine sugar sand, and the water temperature is comfortable year round. Most of the resort hotels in the city are located beach front. There’s also parasailing, sport fishing, and boating excursions available – a popular one is a trip to Deer Island for snorkeling and relaxing with the sand and surf. Be on the lookout for dolphins playing in the wake of the vessel on your way!

Mazatlán is located within daytrippable distance of two towns that have earned the distinction of Pueblo Mágico (Magical Town) by SECTUR, Mexico’s Secretariat of Tourism: Cosalá, and El Rosario, noted by the Secretariat for being a place “with symbolism, legends, history, important events, day-to-day life – in other words, ‘magic’ in its social and cultural manifestations”. Also of note, and somewhat closer to Mazatlán is El Quelite, which has not quite yet earned the same distinction, but the village exists similarly to how it did in the 1860s, complete with burros in the streets and cacti growing from the shingled roofs of the houses. If you go on the weekends, El Meson de los Laureanos serves a delightfully traditional Mexican lunch (complete with horchata, jamaica, fresh tortillas, queso fresco, and beef lengua) and local young people play Bavarian-inspired banda music and dance folklorico.

Photo: The church in El Quelite.

Both Sinaloa and Mazatlan contribute much to Mexican cuisine. Typical dishes include aguachile, a sort of raw shrimp ceviche made which chile peppers, chilorio, a slow-simmered pork refried in lard with a chile sauce, and “bearded” tamales, which contain a whole shrimp. Smoked tuna and octopus are also popular proteins. Good restaurants to enjoy in Mazatlan include La Mazatleca (for fresh seafood) and Casa 46 (for a more cutting edge Continental style). These are of course enjoyed best with a bottle of Pacifico Beer, which has been bottled in Mazatlan since being brewed by German settlers in the early 20th Century.

Photo: Mushroom Soup and Foam “Cappuccino” with a savory Pistachio and Foie Gras Macaron at Casa 46.

Plazuela Machado, which has elements of French and Spanish architecture, is a popular gathering place for Mazatlecans. The square hosts the annual Carnavale celebration, and examiner.com was present for the recent Raices Culinarias (Culinary Roots) Festival which celebrates cuisines from all over Mexico, but particularly those of Sinaloa and Mazatlan. Mazatlan’s history is varied, with French, Spanish, Mexican, Aztec, and German influences. Mazatlan has been inhabited since the Pre-Columbian period – the name of the city is a Nahuatl (Aztec) word meaning “Place of the Deer”.

Photo: Night view of Plazuela Machado from the terrace at Casa 46.

A short drive from Mazatlan is the Los Osuna distillery, where agave is distilled into agave liquor. This is, of course, tequila, but cannot be marketed using the name because Sinaloa is not one of the Mexican States that is designated as the appellation for tequila. Regardless, the agave liquor produced here is of an excellent drinkable quality, which guests can taste on one of many tours offered to the facility from town.

There are plenty of relaxing beachfront resorts in Mazatlan, although there is a dearth of global hospitality brands. Many of the resorts are operated by the Mexican hospitality brand El Cid, and there is a pair of sister resorts owned and operated by the Mazatlan born Pueblo Bonito. For those seeking a more self contained resort, Estrella del Maroccupies an unspoiled beach just south of the bustling city. 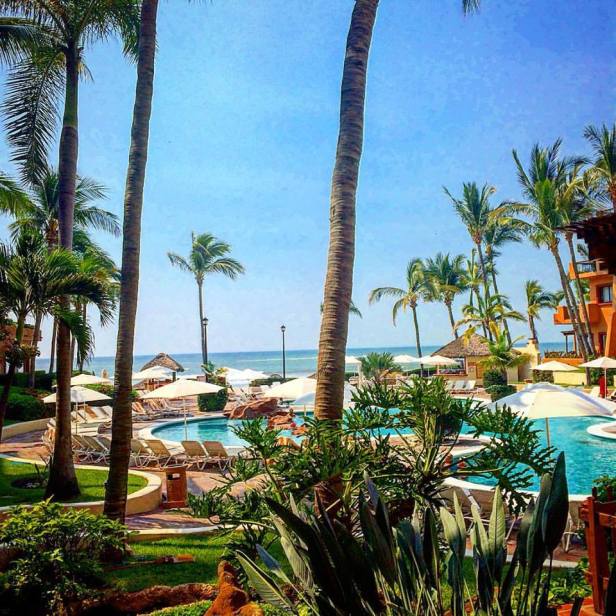