I’m not usually drunk at midnight on New Year’s Eve. But I’m usually blackout drunk by 1 AM on New Year’s Day. I think this is because I typically buy good Champagne (Dom Perignon or Veuve Clicquot) for the party, and when I notice the majority of the guests have taken only a sip of theirs for the New Year’s Toast, I can’t bear to see it go to waste and I drink all the rest from the forgotten flutes set carelessly down on tables while everybody kisses their spouse, boyfriend, or someone they met at the party that they’re planning to get lucky with after they leave.

This is typically on top of several units of hard alcohol, and everybody knows there’s nothing to kickstart an elusive buzz like three quarters of a bottle of Champagne late in the evening. But I’m speaking in generalizations here. I’ve promised readers a story, haven’t I?

New Year’s Eve always bored me. The first memory I have of it is when I was five, at the cabin at Big Lake, and I wondered into the living room late in the morning (it must have been, for the sign was high enough to make the white landscape almost blinding) having gone to bed at the normal time the night before, blissfully unaware of the milestone about to be celebrated.

“What year is it?” my Father asked.

I was mad because I hated getting the answers to questions wrong.

After that, New Year’s was typically a toss-up. I’d usually get to stay up late to count it down, but I don’t have any distinct memories of it until I was old enough to set off fireworks from the deck at the cabin, which many years I did wearing shorts and bunny boots although it was invariably zero or just below.

On New Year’s Eve, 2003, I got a job offer in Anchorage and decided to move home from Las Vegas, where I was going to college. Mom and I decided to go to Las Vegas that evening to pack up and ship my apartment and my car, and I distinctly remember the Alaska Airlines reservations agent was distracted as she booked our reservation because there was an office party in progress on her end of the phone. We booked a flight that would depart at 1:30 in the morning (as many flights from Anchorage do) and I toasted the New Year with my Mother at the tiny little bar adjacent Gate B10 (before the terminal was remodeled) while we waited to board our flight.

Clinking a Grey Goose Cosmopolitan at the airport before boarding a red eye flight isn’t the most memorable way to celebrate New Year’s Eve, so the following year I decided I was going to do something really special.

Both my Mother and I had previously worked at the Hotel Captain Cook, and I’ve always loved the place. Dark woods, a nautical theme that touched on points of Captain Cook’s voyages to Alaska and Hawai’i – it always resonated with me. So I booked a two bedroom suite at the hotel for about $250 and decided to have a great party with all my friends, or rather the friends that I still knew were in town since most of my high school friends were still away at college. We ended up with a group of about ten, which for a two bedroom suite with three bathrooms and a wet bar is still a good crowd.

I usually ended up providing most of the bar for the party, and folks could simply contribute. I liked the chance to get behind a wetbar and play bartender for the evening. I forget which year it was (it might have been the first year) but there were some guests in the room above us who decided to throw everything out of the hotel room window that wasn’t nailed down, and around 2 AM hotel security came to our room and asked us to show them some of the items they had found in the street so we could prove they hadn’t gone out our window. 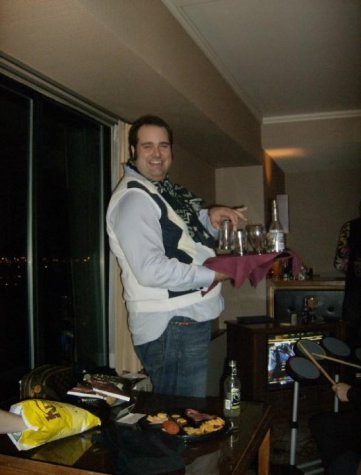 Here I am clearing empty glasses from one year at the party. I would have to say this is probably ’06/’07, because I got that sweater vest while I worked at Nordstom in ’05, and the scarf is an Alexander McQueen that I got at Harvey Nichols in London in October of ’06. I’m clearing the empties away, and you can see somebody playing Rockband on the television behind me. I loved that sweatervest, but it didn’t survive the night. It was pretty worn at that point, and I found it flung behind the couch the next morning with more than one red wine stain on it so I just left it.

Speaking of leaving things in the room, we always left housekeeping a generous cash tip ($20-$30) because of the mess they were having to clean up, and we also left all the leftover booze in the room, which we considered part of the tip.  This year is also notable because I think this is the year I actually got kissed at midnight, but it was a platonic kiss from a transman friend.

The following year (’07/’08) was I think the most balanced. We had a bigger crowd, and by this point I’d gotten wise enough to start setting an actual dollar amount contribution to make sure I wasn’t stuck with more than my fair share of the bill (although I usually ended up footing most of it, which I never minded).

That year I also decided to throw in some fun extras. I went out and bought a bunch of funny hats, for folks to wear, and I had our friend Charlotte make some signs that could bestowed upon people once it became apparent they had over consumed.

Note here me with the lovely Amy, in a photo from that New Year’s Eve. We’ve both been bestowed with the signage. I think we had also just completed dancing the polka. I had done up a mix for the party on my new iPod, and when I do that I like to slip in a few Easter Eggs that make people go “Whaaa?”. In this case it was some German biergarten polka music in between Top 40 Hits. The first New Year’s Party took place a few weeks before Amy and I moved in together as roommates, and she attended every year thereafter.

Part of the evening usually included dinner at the hotel’s pub-themed restaurant, Fletcher’s (pic up top). As we were preparing to go downstairs for the evening, Jessie showed up wearing a Tiffany blue dress, although she had failed to put on undergarments beneath it. Let’s just say there wasn’t much left to the imagination after the light hit the front of it correctly, and she ended up putting on a pair of jeans underneath the dress. She donned the horned Viking helmet as we went to dinner, during which one of the horns went missing. I don’t recall the exact circumstances but she had to leave the table before the rest of us were done (I think she had invited some guests who had shown up and she had to go back to the room to let them in) so she put the helmet on with the horn protruding directly upwards from her forehead like some sort of shortbus unicorn, and plodded through the (rather fancy) restaurant in a pair of boots that were too big (I believe they were borrowed), for which she received an ovation from the rest of the patrons.

And here I am with Xander, tending the bar. You’ll notice we’re both wearing some of the “funny hats”. I throw a good party, don’t I? This was the year Jessie had over imbibed, missed the countdown to the New Year, then rallied at 12:15 and demanded that we all do it again so she could ring the new year in with us. What’s a crowd of drunks going to do in that situation, say no?

The hotel never seemed to have an issue with the party, for I think it was usually otherwise empty. There’s not a way they could have not known there were goings-on, for my first call was usually to room service to request 20 – 30 champagne flutes and a corkscrew. There were also usually two bell carts going up to the room, one for food, and one for booze, and they sat conspicuously behind me while I checked in at the front desk, so by the time we arrived in the room it was usually pretty well understood what exactly was going to be going on.

The 2 bedroom suites at the Hotel Captain Cook are named for explorers, and several years in a row we got the Francis Drake Suite, which I think is on the 12th or 14th floor – around there. You could usually see part of the fireworks from the master bedroom, which was on the Northeast corner of the tower, but the view was partially blocked by the hotel’s two other towers.

The next morning we ventured down to Snow City Cafe for breakfast, early enough (around 8:30) that the wait for a table wouldn’t be too long. We waited for about ten minutes which for Snow City on a holiday is really good. I was lucky there was nobody in the bathroom when I needed it because some of the liquor from the previous night was demanding something of a hasty retreat, but after that a comforting bowl of tomato soup calmed everybody down. It pains me to mention this, but we were young and stupid and I think there’s a statute of limitations on this sort of thing anyway, but when we were walking back to the hotel we noticed that K Street, which runs directly beneath the windows of our suite, was absolutely littered with hundreds upon hundreds of cigarette butts. Whether the suites were smoking or nonsmoking was something of a grey area, because if I recall correctly they had “no smoking” signs, but they also had ashtrays. I think the rule was something to the effect of “they’re technically smoking rooms because there are so few of them and if you get a suite you can do whatever you want in it, but they’re generally not smoked in.” Works for us, I guess.

That party in ’07/’08 was the last one, because I left Anchorage in July of that year. All told it was four years in a row, from 2004-2008 during which we had the New Year’s Eve Parties, and they’re some of the best fuzzy memories I have.