The snow is just beginning to flutter down from the sudden overcast outside the cloistered porte cochere at the St. Regis Aspen on a mid-November Saturday afternoon. The liveried doorman provides a warm welcome and quickly collects luggage on the ubiquitous brass trolley for delivery to the room. The intimate, compartmentalized lobby seems massive during the shoulder season, with perhaps one or two figures sighted outside of the employee spaces behind the various sign-posted desks in the lobby. Bell, Butler, Front Desk—all smile a friendly greeting. It hasn’t been a busy day.

A Front Desk Clerk in an ill-fitting uniform is chatty and pleasant, and apologetic when he finds that despite it being mid-afternoon, the room isn’t yet ready. Not a problem though—he quickly hands over a card for a cocktail at the bar and solicits a phone number for easy notification when the room has been prepared. Easy enough.

A quick walk around the property shows an edifice reawakening after a seasonal closure. Walkie-talkie porting employees stalk the corridors, readying public and guest rooms for the onslaught of holiday guests soon to descend on the remote resort town. Some of the outlets haven’t come back yet. The hotel’s signature restaurant is only open for breakfast; the other is a pile of chairs and tables stacked in the center of the room. Some of the chandeliers need a little TLC—some are missing crystals while stringing on some of the others has loosened, dangling like stray hairs in a matriarch’s up-do. Still, that hardly constitutes faded glory, even to the critical eye; the walkie-talkies scurrying around can be trusted to make sure everything is ship shape and Bristol fashion before too long.

The purpose of the visit, however, is food and Bloody Marys. One of the major traditions of the St. Regis brand is the Bloody Mary, invented at the St. Regis New York in 1934 and celebrating a milestone 80th anniversary in 2014. The incarnation here at the St. Regis Aspen is known as the Downhill Snapper. Settling into one of the plush bar stools in the empty bar, it’s easy to admire the lovely mural entitled The Myth of Strong Wind, but there are no cocktail menus. “They’re over there.” The bartender points, not letting the silence linger too long before he steps out into the empty lounge and fetches one from one of the tables. 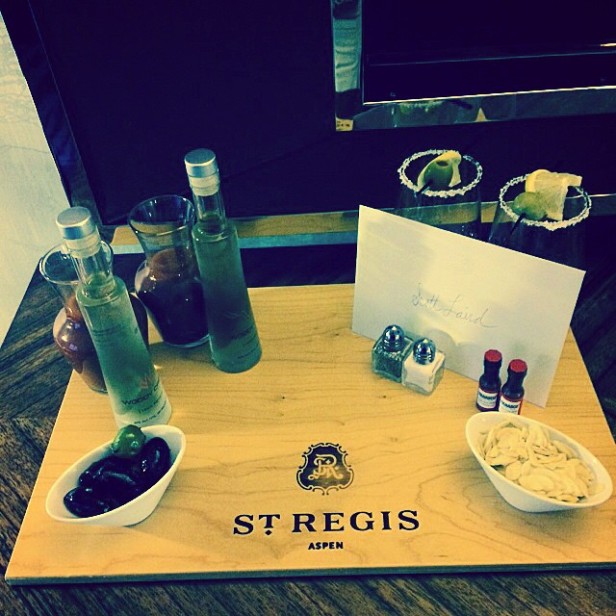 Another of the St. Regis brand traditions is to pay homage to other properties that carry the St. Regis name. In addition to the Downhill Snapper, the bar menu offers the bespoke Bloody Marys from the St. Regis locations in New York, London, and Osaka. The Shogun Mary from Osaka is made with wasabi and soy sauce and was served in a chilled metal cocktail glass. It drinks like a meal, and certainly can’t be downed. A mobile phone ring soon indicates the room has been made ready, without too long of a wait, although luggage takes a bit longer—the same front desk clerk ultimately bringing them with an apology for the wait; apparently all the bell staff are out on an airport pickup.

And what a room! Conscientious-but-still-luxurious faux fur accents the crisp white linens on the bed, the fittings are spotless and well-maintained, and there are thoughtful touches of utility throughout. Upon the desk is a lacquered box filled with didn’t-know-you-needed-them-until-you-do desk items such as post it notes, a highlighter, and paperclips. There’s an Illy coffee maker, outlets near both the bed and desk for small electronics, plenty of suitcase stands in the closet (and plenty of room to lay them out for even a large suitcase) in the room, and a minibar chock full of all the essentials, including a locally made vodka brand. 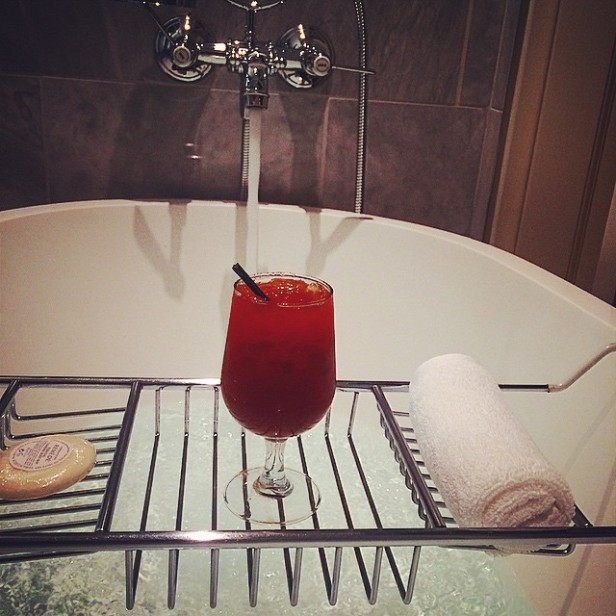 It’s hard to think of a bathroom as the crowning jewel of a hotel room, but this is something St. Regis has always down particularly well. It’s marble, it’s nearly half the size of the room itself, and it’s immaculate. There’s a large soaking tub with a metal soap tray laid across with an empty space that nearly begs for a Bloody Mary to be set down while enjoying a soak. Plenty of fluffly towels, a separate WC (with the paper folded into a point and monogrammed with the St. Regis crest), a marble spa shower, double vanities, and Remède Spa amenities cap it off. If one simply can’t bathe without mountain views, double folding doors open out to the guest room so the view can be enjoyed from the tub.

Speaking of the view, it’s fantastic. The room is a Classic Guestroom, the basic category, but with the curtains drawn there’s a view of the courtyard, which in late November already featured a Christmas tree, and a sumptuous view of the mountain beyond the steaming whirlpool on the pool deck. It’s the first day the lifts are open on the mountain so there are a few skiers wending their way down the slopes, but it’s mostly locals—the seasonal visitors have yet to arrive. 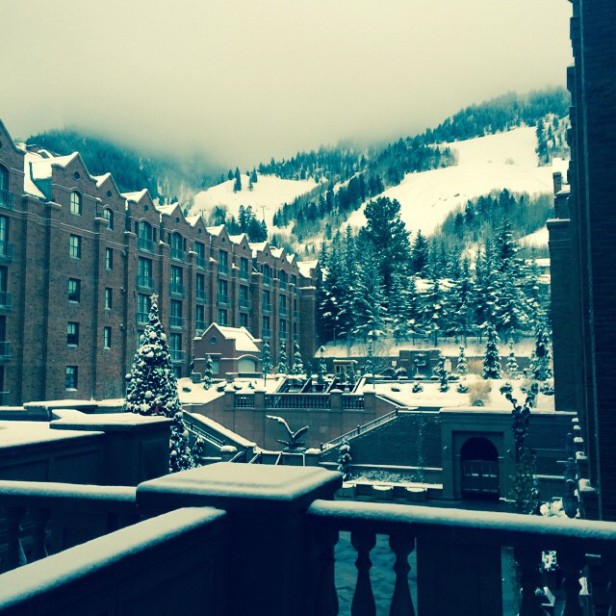 Room Service arrived later in the evening with some timely Downhill Snappers (at least one of which might have been enjoyed in the bath tub). The vodka comes from Woody Creek Distillers in neighboring Basalt and is a lovely shade of green, thanks to the basil and dill tucked ship-in-a-bottle style into the spirits. The method has been made easy: pour vodka, add mix and garnish. The taste is an invigorating one, suggesting the rich bounty of the Colorado summer and the cool crispness of the high mountain winter.

The Shadow Mountain Lounge is a great place for a nightcap (another St. Regis tradition) or après ski next to a roaring fireplace indoors or fire pit outdoors. Service here is gracious and anticipatory; one doesn’t sit down for too long before being asked if they can be brought anything. Disappointingly, the St. Regis tradition of champagne sabering, nightly at 4:45 p.m. in the winter months, wasn’t observed at the prescribed time.

Takeaway: The St. Regis Aspen is a sumptuous resort at which to while the time in between hitting the slopes or enjoying Aspen’s ultra chic boutiques and cozy restaurants. As is the rule with any seasonal property, the hotel’s symphony likely reaches its fullest crescendo during the season’s zenith.

Details: Book online at www.stregis.com. Standard rooms range from $299 – $799 depending on the season. The hotel provides complimentary shuttle service from Aspen-Pitkin County Airport. Warm thanks to St. Regis Aspen for providing accommodations in preparation for this story.